I get it. I hear you. The electoral college is archaic! It’s ridiculous! We should just go with the popular vote! There’s no reason for this!

Fortunately, those occasions are extremely rare. At the time of writing this blog, the official counting of votes is not complete, but it does appear possible that Hillary Clinton will finish ahead in the popular vote, even though she lost in the electoral college. So it does happen.

Understandably, then, Clinton’s supporters have raised the outcry to abandon the electoral college altogether. But is that really such a good idea?

The purpose of today’s blog is not to discuss all of the pros and cons of the electoral college. That has been done numerous times over the years. If you’d like to read one such article, go here. Instead, I’d like to consider what might result if we eliminate it.

Take a look at this graphic: 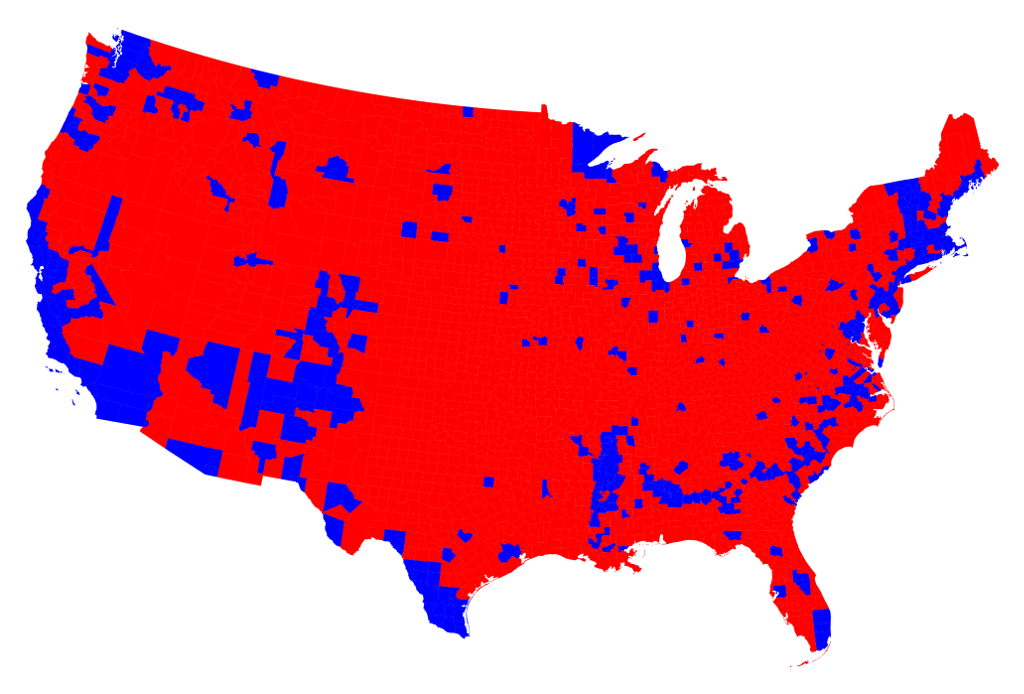 The red areas reflect those counties where President-Elect Trump prevailed. The blue areas went for Clinton. As you can see, the vast majority of the country land-wise went for Trump, and it’s not even close. The blue areas are typically large urban centers, such as New York City and Los Angeles, which almost invariably favor the Democrats. While this graphic is from 2016, the maps from previous Presidential elections look very similar.

Now, imagine a scenario where only the popular vote mattered. It is possible, and perhaps even probable, that the entire country would be controlled by the will of the people in those blue, mostly urban, areas. Does that seem fair?

It seems to me that it wouldn’t take very long for the millions of people in the red areas to recognize that they don’t really have a voice. Moreover, they might not have a voice for a very long time. What do you think those people and those states would do? Remember “taxation without representation”? At some point the people in those states would want out of the union altogether.

But because of the electoral college, those red areas are critical. Those states have votes, even though they aren’t as populous as California or New York. Presidential candidates ignore them at their own peril. The interests of the people in those red areas, which those in large cities may not understand at all, must be taken into account.

Could it be that the electoral college is one of those brilliant ideas from the founding fathers that actually holds our country together?