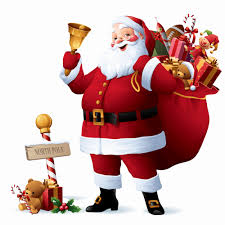 As a child, I absolutely loved Christmas. While we didn’t have much money, I still enjoyed the sights and sounds, the Christmas lights, the Christmas trees, the snow, and everything that went along with it. In fact, it’s still one of my favorite times of the year.

But of course, the best part of it was always the idea of Santa Claus. Like most kids, I would dream of getting lots of toys, games, and everything else children anticipate. And it’s certainly understandable – this mythical person that I wouldn’t see would just appear in my house after midnight and leave all sorts of “free” gifts for me. Who wouldn’t like that, right?

Now as a parent of four children, my perspective on Santa Claus has changed. I understand that there’s nothing really “free”. Even Santa’s gifts come with a price, and it’s a price that my wife and I have to pay. A couple of our children are still young enough that they don’t realize that. But for most of us, as we grow into adults, we come to understand how it works.

As I was watching the Democratic debate on Tuesday night, however, I came to the stark belief that the five candidates on stage, even though they are all obviously adults, still believe in the mythical idea that Santa is real. Consider these statements, which I quote from the New York Times transcript:

Bernie Sanders: “And in my view what we need to do is… make every public college and university in this country tuition free.”

Hillary Clinton: “My plan would enable anyone to go to a public college or university tuition free.”

And this free tuition was not just limited to American citizens, which on its own would be ridiculous. Several of them would make it available even to so-called “undocumented immigrants” (I call them illegals, but perhaps that’s just parsing words…). Anderson Cooper asked Hillary directly if she would include the “undocumented”:

COOPER: So, on the record, you believe that undocumented immigrants should get instate college tuition.

CLINTON: If their states agree, then we want more states to do the same thing.

So to Hillary, as long as a state agreed to pay for all illegal immigrants, she thinks it’s great!

When asked specifically about expanding Obamacare to the “undocumented”, Hillary stated: “Well, first of all, I want to make sure every child gets health care. That’s why I helped to create the Children’s Health Insurance Program, and I want to support states that are expanding health care and including undocumented children and others.”

When Senator Jim Webb was asked, here’s what he said:

LOPEZ: Senator Webb, do you support the undocumented immigrants getting Obamacare?

WEBB: I wouldn’t have a problem with that.

If it weren’t so scary, it would actually be comical. And the frightening thing is that so many voters will once again be caught up in this notion that these things are actually free.

We all know that in reality, somebody is paying for these “free” programs. While Sanders wants to tax Wall Street, and the others all want to continue raising taxes on the wealthy, the truth is that all of us who are working hard for our families will be paying for these things. The five on stage won’t have to pay anything. It’s always easy to start new programs when you’re paying for them with someone else’s money.

When it comes to my children and the Christmas season, I don’t have any problem playing the Santa. I just don’t want to see it in my President. There’s a time for fantasy and a time for reality.

Here’s the transcript if you want some entertaining reading: